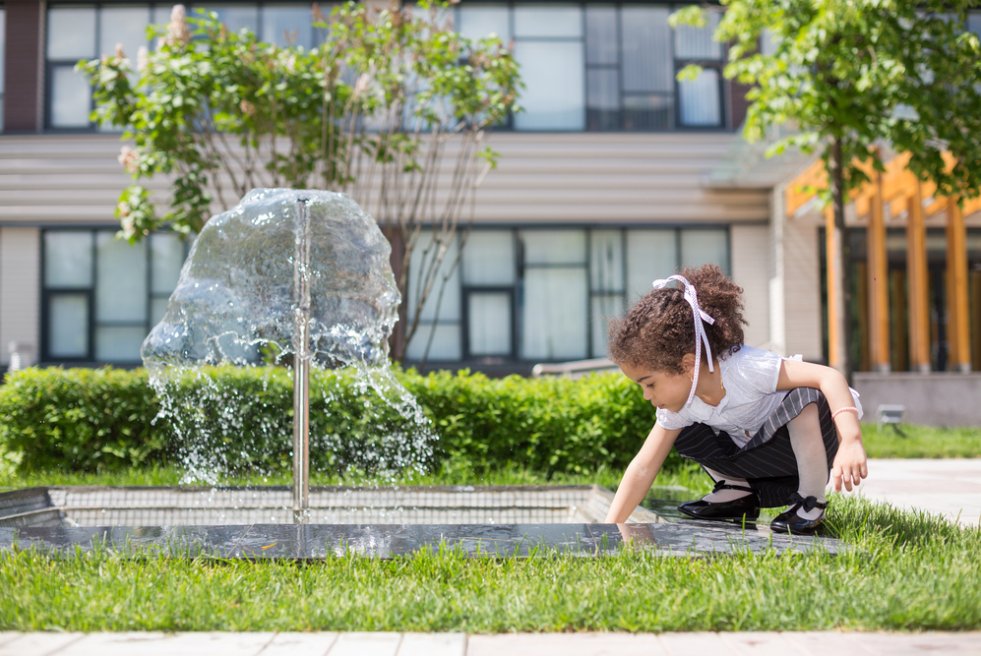 In urban areas, green space often is a scarce commodity. Greenery in the city disappears for example through new housing, the paving of squares with stone or cement and the construction of business parks. More and more people are also tiling their gardens. Greenery in the city is very important for climate resilience and the quality of life of its inhabitants. In recent years of recession, many municipalities have cut back on municipal green space. Now it is time to turn the tide and make urban spaces greener. Therefore, we present seven reasons to invest in a green city.

Campaign ‘The greener, the better’

This longread was made in the context of the municipal elections in 2018. Wageningen Environmental Research is participating in the Klimaatverbond (Climate Alliance) campaign 'The greener, the better'.

1.  Green reduces the risk of flooding

In cities, up to 70 % of the surface is sometimes built on and paved. This may run up to 90 % in inner cities and industrial estates. Water hardly has a chance to percolate down into the soil because of all this hardening. Green ensures that not all precipitation has to be drained. “Climate change increases the frequency and intensity of peak downpours and most of these times, our drainage systems are not capable of dealing with this. This may lead to flooding”, explains Tim van Hattum (programme leader Green Climate Solutions). While it is technically possible to adjust the sewage systems to higher peaks, it is questionable whether this is cost-effective.

The best approach is to prevent flooding by taking three steps: retention, storage and drainage. The soil basically works like a sponge. In green areas, water can infiltrate freely in the soil, be absorbed by vegetation and evaporate and supplement the groundwater. More green in gardens, on company premises and in the public space ensures that rainwater can be retained and stored in the place where it falls. Also green roofs and wadis – a lower piece of ground, like a ditch or a sloping pit, where rainwater can be led and in which it may easily infiltrate - can help prevent flooding. Van Hattum: “Cities are now mainly designed to drain the water, but in the future we will increasingly adapt to the climate due to green designs and ensure that the water is retained and stored in the city."

2.  Green is cooling the city in summer

Cities are usually warmer than the surrounding countryside. The brick houses, squares and streets absorb a lot of heat yet only cool down slowly. After a summer day, especially in the night in the heart of a city, it is sometimes five to ten degrees warmer than in a rural environment. This effect also occurs in smaller towns and villages.

There are numerous reasons to prevent extreme heat in urban areas as much as possible. Excessive heat puts the health of vulnerable groups at stake, like the elderly, young children and patients with cardiovascular diseases. Heat waves cost human lives: every degree that the temperature rises during a heatwave is reflected in mortality statistics. The hot years 2003 and 2006, for example, gave way to between 1000 and 2200 more people dying in the Netherlands than in a regular year. This concerns people who would otherwise have been able to live much longer, according to research. In addition, labour productivity decreases during hot periods, there are negative consequences for infrastructure, water quality and so on.

“Because of climate change the chance of heat waves is increasing. A greener design of our cities can be helpful to mitigate heat in the city,” states heat expert Cor Jacobs.

Trees, shrubs and other green areas can help reduce the temperature in a city by evaporating water. The energy needed for this cannot be used any more for the direct heating of the air and materials. Whereas a bitumen roof in the burning sun can heat up to 70 degrees, a green roof with mosses and grasses in the same conditions does not get warmer than 32 degrees, provided that enough water is available.  Especially trees provide shade. In the shadow of trees, the temperature that people experience rises less sharply, that is to say with sufficient ventilation. Shadow is a factor in the prevention of heat stress. Parks are cool spots in the city because of the effect of evaporation and shading, and their effect can even be measured beyond their boundaries.

Scores of studies underline that the presence of green in an area lowers stress. The first time this effect was investigated thoroughly, the results were so remarkable that top journal Science (Ulrich 1984) published it in bold. Patients in America who had a tree view from their room recovered measurably faster from surgery than patients with a view of a blind wall. In the Netherlands, researchers showed that people are healthier when their living environment has more greenery. Children in green neighbourhoods for example suffer 15 % less often from obesity. Such connections have repeatedly proved to be strongest in disadvantaged groups. For example, children in poor green neighbourhoods receive 10 % fewer prescriptions for Ritalin than children in equally poor but obviously less green neighbourhoods.

Furthermore, research shows that not every tree or shrub will render the same effect. Neighbourhoods that were judged by independent assessors to have a better quality of green showed better results: residents felt better and had been seeing the doctor less over the past weeks.

Those who feel more comfortable and are less bothered by stress will not just be healthier, but also more productive. This significantly contributes to the societal benefits of investments in green. Researcher Sjerp de Vries says: “The complicating factor is that those who benefit from the improvement in health will not always be those who are paying for the construction of green spaces. This means that socially profitable investments in green spaces are not always followed through.”

Another benefit is that green can offer an attractive place for playing and sports. More exercise also contributes to better health. In healthcare, there is increasing emphasis on the prevention of diseases (see the Dutch National Prevention Accord included in the Rutte III coalition agreement). An attractive green environment contributes to this.

Neighbourhood green areas such as parks, public gardens, community parks and allotments can contribute to social cohesion in that neighbourhood. Marian Stuiver, programme leader Metropolitan Solutions, sees this as an important topic for the future: “The public space in the city - squares, streets and parks and the way in which they are designed- can support the social cohesion and the quality of life of inhabitants of the city enormously”.

The only exception to this occurs when there is a large park in the surroundings. Vreke suspects that this is caused by the fact that a park does not only serve the neighbourhood, but that it is a green location intended to serve a larger area, with generally different user functions and visitors from the smaller-scale neighbourhood green.

Green enhances the environment, dresses up buildings and increases the attractiveness of an area, creating a better business climate for both citizens and businesses. According to green city expert Robbert Snep, it is no coincidence that Brainport Regio Eindhoven invests a lot in greenery. In the international battle for talent, Brainport Eindhoven competes with other high-tech regions worldwide. "With green industrial estates, the city offers knowledge-intensive companies a work landscape that international talent and customers love to visit," Snep says. "Moreover, a green city also offers a more attractive living environment, which makes it easier for companies to retain staff."

Experiencing nature in your own living, school or work environment… This is also possible in the city. Cities are increasingly discovered by nature, making the city an ecosystem in itself, with a wide variety of plant and animal species. The design of the city determines the species that claim it for their habitat. A stony urban landscape will attract mainly pigeons, crows and seagulls. A city with leafy greenery, gardens, lane trees, grassy verges and public parks with flowery meadows and small waters may support songbirds, butterflies and hedgehogs. Green roofs and green facades contribute to the natural value.

By applying ecological management in public and private green spaces, citizens, businesses and the local government contribute to the conservation of special and endangered species such as wild bees. These particular species demand more than a standard lawn; they prefer a varied biotope with many native plants. Such a natural city also creates an environment in which children and adults can marvel at the rich diversity of urban biodiversity.

7.  Green boosts the value of houses and offices

Housing prices are higher in a green neighbourhood than the prices of comparable houses are in a neighbourhood without green. Various studies indicate that the value of real estate is well higher in case it has a view of water (15%), public space (10%), a park (6%) or public garden (5%). "Creating green space can therefore contribute to increasing real estate value," says Jan Vreke.

Three cases recently analysed by Wageningen Economic Research made clear that urban green in Amsterdam may be worth more than residential construction in some locations.

Green in the living, working and living environment is of great social value and also represents a great economic value. Increasing numbers of stakeholders such as municipalities, housing corporations and project developers are starting to see that. When green is used as a multifunctional solution - think of water retention, reducing heat stress, preventing degradation of the living environment, stimulating exercise, etc. - then green is an investment that pays for itself on many fronts.

Greenery in the city

Do you want to read more about green city research at Wageningen University & Research? Take a look at our Dossier Greenery in the city for an overview of news, projects and blogs.

This longread was made in collaboration with: