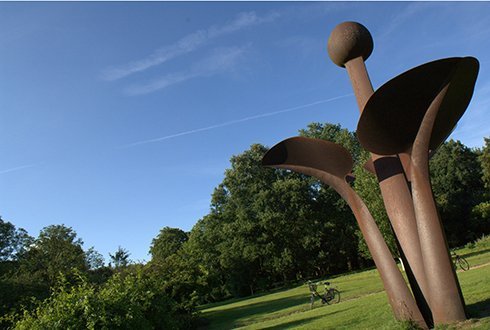 This year’s eleventh edition of the inter-national outdoor exhibition Beelden op de Berg (Sculptures on the Mountain) will be held not only in Belmonte Arboretum in Wageningen, but also on Wageningen Campus. Under the poetic title of ‘Summer Snow’, 10 artists, all drawing inspiration from the theme ‘eternal rejuvenation’, will present their new work in Belmonte Arboretum from 17 June to 23 September. With this theme, Beelden op de Berg fits in with the celebration of 100 Years Wageningen University & Research.

In the run-up to the exhibition in Belmonte Arboretum, the public will have the opportunity to view the work of three of the participating artists on Wageningen Campus: William Engelen, Anne Geene and Lizan Freijsen.

William Engelen and Anne Geene, both Artist in Residence, are extending their atelier to the campus. In this scientific environment of scientists and students, they develop and elaborate their plans for the exhibition. William Engelen embedded in the meteorology group of Bert Holtslag en Bert Heusinkveld en Anne Geene in the nature conservation group of David Kleijn. Their research will be presented and placed in a wider context in two afternoon meetings organised by Studium Generale and Impulse in collaboration with Stichting Beelden op de Berg.

William Engelen on the weather as a conductor: Meteophon

William will present his own work and compositions in which he intentionally uses unpredictable parameters. He will talk about Meteophon, a real-time audio installation in which the weather conducts the soundscape. A second version of Meteophon will be presented during Beelden op de Berg.

William will also present a number of modern and contemporary pieces of music in which composers try to catch types of weather into sound. The composers translate events like rain, wind, thunder and snow in various ways in images of sound.

Dr. Bert Heusinkveld from the Meteorology department at Wageningen University will reflect upon the way in which meteorological data in science is transformed into forecasts and maps.

The Sound of Chocolate invites people to slow down and to get immersed by their senses. With their multisensory journeys the Sound of Chocolate wants to bring awareness to the importance that sound has in our daily lives, especially while we are enjoying food or drinks, and how all of our senses influence each other. What you hear, see and touch will influence your taste. (Only a limited number of people can participate in this last part of the afternoon.)

Thursday 24 May ‘Gather, Collect and Measure’

Anne will talk about her work and what inspires her, particularly about science as an important source of inspiration. From the endless eagerness of mankind to know and measure everything. There is nothing we don ‘t want to know; we hopelessly keep searching for evidence.

Visual artist and writer Mascini reviews the ambiguous lifespan of various concepts, such as that of language, landscape and a single breath. She will address our cultural paradigms with regard to the definitions of life and death and initiate a dialogue by introducing whimsical elements in the current systems of measurement

Botanic Philosopher Norbert Peeters describes what happened when Darwin replaced the natural order as depicted in a linear ladder (scala naturae) by a shrub kind of figure. ‘It is an odd looking affair,’ Darwin admitted to his publisher John Murray, ‘but is indispensable to show the nature of the very complex affinities of past & present animals.’

Both afternoons are open to the public free of charge.

Levensboom | Impulse | 8 June – 14 June |  the results of the ‘Tree of Life’ educational project. Various primary schools in and around Wageningen have been working on the ‘eternal rejuvenation’ theme