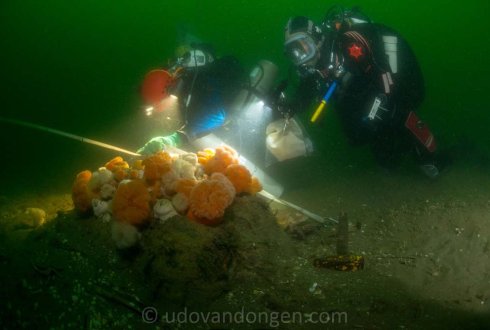 The aim of this study is to study the effect of hard substrates on biodiversity.

Offshore structures in the Dutch North Sea provide a habitat for a range of species such as anemones, soft corals, edible crabs and many others that are not found elsewhere on the predominantly sandy seafloor. Up to date, very little is known about the species community that is associated with hard substrates in our sea. Parameters such as species richness, biomass and role in the food web remain to be elucidated. In the past, large oyster beds, peat banks as well as stones and rocks originating from glaciers covered large parts of our seafloor. Most of these have now disappeared. In recent decades however, new hard substrates have been introduced. Would these platforms, wind farms and shipwrecks enrich the North Sea biodiversity in a similar way?

The aim of this study is to fill that gap in our knowledge: to study the effect of hard substrates on biodiversity. We want to investigate the role of hard substrates as stepping stones for certain species, and the potential of hard substrates for marine production such as aquaculture of mussels. An important part of the study will focus on the question whether decommissioned platforms can be deployed as artificial reefs to increase biodiversity (rigs-to-reefs).

Results will be made public in a dissertation, peer-reviewed articles, as well as through social media and other dissemination platforms.

Collaboration has been arranged with the following organisations (in alphabetical order):

This Dutch research and advice consultancy works in the fields of ecology, nature, the environment and landscape design. They have experience with research diving and investigated epifauna in the OWEZ wind farm as well as on shipwrecks and artificial reefs in the North Sea.

This Dutch organisation organises wreck dives to North Sea wrecks on which the volunteer divers remove ghost fishing nets, photograph, film and study the epifauna. Joop Coolen is involved in this foundation and will continue to join the dives, combining the existing volunteer project with his PhD project.

This gas company will facilitate the sampling on offshore platforms by allowing us access to the diving facilities and allowing us to take samplings during regular maintenance diving activities.

Management Unit of the North Sea Mathematical Models and the Scheldt estuary, abbreviated to MUMM, is a department of the Royal Belgian Institute of Natural Sciences (RBINS). We will cooperate with the MUMM in their research program in the Belgian wind farms.
NAM / Shell