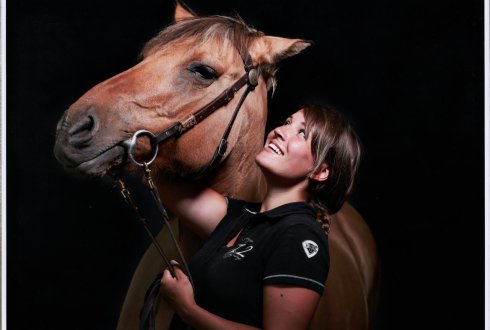 Mila is currently doing her major thesis at the (former) specialisation of Animal Health and Behaviour. She is interested in the research part, especially in the topics of animal health and immunology. She is also a very active student besides her study. At this page you can read all about Mila's student life!

"Before starting with the master Animal Sciences, I already followed the bachelor Animal Sciences, which takes three years. During my bachelor I was especially interested in courses on animal health, that is why I designed my own bachelor-minor with courses concerning human and animal health. Because of my interest in health, it was obvious that I chose the master specialisation that was formerly known as Animal Health and Behaviour. Within this specialisation I’m currently working on my first major thesis for the chairgroup Adaptation Physiology (ADP)."

"The subject of my thesis is investigating the effects of different levels of carbon dioxide on the embryonic development of chickens during incubation. Currently higher levels of carbon dioxide are used in practice, as a way to reduce hatch spread. However, high hatchability is not always similar to high hatch viability. For this research we’re keeping several batches of broiler eggs in incubators, at different levels of carbon dioxide. The eggs are weighed and checked on viability once a week, and after nineteen days of incubation blood samples are taken from the embryo’s. From day twenty of incubation the chicks usually hatch. During these days we need to check every six hours whether the chicks have hatched. When the chicks have hatched they are weighed, measured, organs are weighed and liver and blood are obtained for laboratory tests. Several blood parameters and liver glycogen will be measured in the lab. Based on all these data I will conclude whether higher levels of carbon dioxide during incubation have (negative?) consequences for the wellbeing and robustness of chickens."

"During my master and my major thesis I found out that I’m very interested in the research side of Animal Science, and that is why I also pursue a job in research in animal health. I followed the course Research Master Cluster (instead of Academic Consultancy Training), and found this interesting and challenging. Possibly I’d like to do a PhD, maybe even at the WUR. But for now I will first finish my major thesis and then do another thesis, hopefully in the subject of immunology."