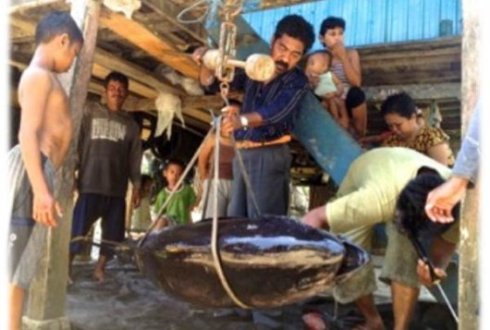 After Momo Kochen, I was the second intern to work at Anova as part of the Fishing & Living™ initiative in Indonesia.

Anova Seafood – supplying seafood to both the European and U.S. market - set up the initiative, but the end goal is for it to become an independent Non Governmental Organization (NGO). Fishing & Living was developed to contribute to Anova’s Corporate Social Responsibility (CSR), and its activities focus on sustainability and striving for Marine Stewardship Council (MSC) certification of handline caught yellowfin tuna. Currently, the initiative is a collaboration of Anova Food, both its Dutch and US branches, USAID, the World Wildlife Fund (WWF), the Indonesian government and a host of other organisations and individuals working in the communities, and of course, the fishermen themselves.

During my five-month internship I mainly focused on the development of a data collection protocol to gather information on the interaction between the handline tuna fisheries and Endangered, Threatened, and Protected species (ETPs), a crucial requirement for MSC-certification. As a pilot study I spent one month living with a local fishing community in South Sulawesi, which has been an invaluable learning experience. I interviewed fishermen about ETPs, and felt that everybody was extremely friendly, open,and proud to share their experiences. In the first period of this field study I was present tuna landings and helped out when possible, without asking any confronting questions yet. This way the community was comfortable having me around and trusted me in providing reliable answers. In the end, the field study formed the basis of the development of a port-­based survey to collect continuous data on the interaction between the handline tuna fishery and ETPs for different landing sites throughout Indonesia. As part of the protocol implementation I trained several enumerators and a field officer on using species identification guides, questionnaires, and entering the gathered data.

Besides my time in Sulawesi, I learned a great deal from working together with different stakeholders involved in improving the sustainability of the fishery, which often were meetings in Jakarta, Bali, or Lombok. Some of these stakeholders are the USAID Indonesia Marine and Climate Support (IMACS) Project, The Walton Family Foundation, fish processors, FishWise, WWF, several Indonesian government bodies, CSIRO Marine and Atmospheric Research, and fishermen. This has given me a wide perspective on the challenges Indonesia is facing to reach MSC‐certification, of which there are many. It has been motivating to see that despite the challenges, the Fishing & Living sustainability team always stayed enthusiastic to set the lead example. I consider myself lucky that I have been part of such a great team.