Legumes comprise one of the most important agricultural taxa worldwide providing a major source of proteins for humans and animals, and nitrogen for soil improvement.

Especially for development of sustainable agricultural systems legumes will play a major role, since they are able to establish a symbiotic relation with bacteria belonging to the genera Azorhizobium, Bradyrhizobium, Mesorhizobium, Rhizobium and Sinorhizobium. Under nitrogen limiting conditions, the leguminous plants will form root nodules in where the bacteria are hosted and will find the proper conditions to reduce atmospheric nitrogen into ammonia. Symbiotic nitrogen fixation largely contributes to the nitrogen nutrition of the host plant, suppressing the need for nitrogen fertilizers.

Medicago as a model

As a legume, and unlike the most studied genetic model plant, Arabidopsis, Medicago truncatula (Medicago) establishes symbiotic relationships with nitrogen fixing Rhizobia. The host strain for Medicago is Sinorhizobium meliloti, which by it self is a model organism as reflected in the sequencing of its complete genome (http://sequence.toulouse.inra.fr/meliloti.html). Medicago has been chosen as a model because of its relative small and simply organized genome (~500 Mbps), fast generation time, the availability of numerous ecotypes and its phylogenetic relation with important crop species like alfalfa (Medicago sativa), pea (Pisum sativum), white clover (Trifolium repens), red clover (Trifolium pratense), and faba bean (Vicia faba). All these crop species have a rather large and complicated genome organization, and the Medicago genome can be used for as reference. Furthermore, Medicago is used to study: endomycorrhizal symbiosis, plant-pathogen (bacteria, fungi, nematodes and insects) interactions, secondary metabolites and pod filling. Collaborative effort from an international community has resulted in the development of many resources and tools for Medicago; including micro-array platforms, genome sequencing programs and reverse genetic tools.

The Wageningen Medicago Group is part of the Laboratory of Molecular Biology at the Department of Plant Sciences of the Wageningen University. It has 2 main research interests:

Rhizobium induced nodule formation on legume roots starts with the following two processes: (1) reprogramming of differentiated root cortical cells in order to form a nodule primordium and (2) infection of the root by the bacteria. For both processes the bacterial secreted signals, named nodulation (Nod) factors play a crucial role. Nod factors are lipo-chitosaccharides. Application of purified Nod factors to legume plants induced root nodule formation, demonstrating the importance of this signal molecule in the establishment of the Rhizobium symbiosis.

By the use of genetics in Medicago essential components of Nod factor perception and signaling cascade have been identified. Since these genetic screens have been done in great depth, not only in Medicago but also other legume plant species, it can be concluded that most –if not all- components of the Nod signaling cascade that can be identified genetically have been cloned. The central theme of the current research of the Medicago Group is to unravel the functioning of this Nod factor signaling network during different steps in root nodule formation and Rhizobium infection.

The Wageningen Medicago Group is involved in international Medicago genome sequencing project. The genome is about ~500 Mbps divided over 8 chromosomes, meaning that it is about 4-5 times the size of the Arabidopsis thaliana (Arabidopsis) genome and similar in size when compared to rice. However, in contrast to rice, the Medicago genome has a more simple organization. This becomes obvious when comparing chromosome structure during meiosis pachytene stage. Chromosomes are fully paired at this stage and are about 20 times longer than their counterparts at mitotic metaphase. In general pachytene chromosomes display a clear differentiation between euchromatin and heterochromatin, which correspond to gene-rich and gene-poor regions in the genome. Medicago pachytene chromosomes have large blocks of heterochromatin around the centromere (the so-called pericentromeric region), whereas the distal parts of the arms are euchromatic. Heterochromatin mainly contains repeat elements, whereas most genes are located in the euchromatin. Therefore the sequence program focuses specifically on the gene-rich chromosome arms, which encompasses about half of the genome. The aim of the Wageningen Medicago group is to determine the exact position of the borders between euchromatin and heterochromatin. 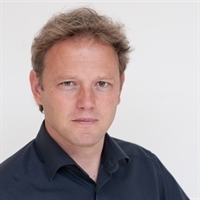