Technical innovations are an important focus within research for sustainable fisheries. One area for improvement is the fishing gear. Clever adjustments can help reduce bycatch, seabed disturbance and fuel use. Researchers from Wageningen Marine Research are working on all these technical aspects of sustainable fisheries.

Pieke Molenaar studies fishing techniques and fisheries in the commercial marine fishing sector – “from the smallest shrimp boats to the largest pelagic trawlers and everything in between,” he says. Molenaar analyses new fishing techniques, calculates economic feasibility, investigates quantities of bycatch and its survival, and much more – all in the context of sustainability. “There are many technical questions to answer,” says the researcher, “in a sector that is very diverse and ever-evolving.”

The state of fish stocks is one important aspect of sustainable fisheries. Another is bycatch. Statistics on this issue abound in popular media. For example, for every kilogram of fish caught, several kilograms of bycatch are said to be dumped overboard, with a slim chance of survival. But such generalisations are invalid, says Molenaar, who speaks from significant research experience. “The share of bycatch varies from 1 to 99 percent,” he says, “depending on location, season and fishery type, among other things. But it is true, in general, that there is a lot of room for improvement.”

His colleague Edward Schram adds: “For sole and plaice, it is a fact that the bycatch usually outweighs the market-worthy fish.” Molenaar: “But it’s very different for pelagic fishing. In deeper waters the bycatch rarely reaches 1 percent – although here it may concern a marine mammal or large shark.”

Research on survival of species in bycatch

Since the 1950s, the fishing industry has seen many technical developments. Consequently, ships are bringing in more and more fish, of more species, and from larger areas.

But in recent years, attention has shifted towards societal aspects of these developments, including sustainability, animal welfare and economic feasibility for fishers. “Our research has evolved accordingly,” says Schram. “For instance, much of our research pertains to the survival of by-caught species that are released back into the sea. Thanks to Pieke’s pioneering work in this area, we can now investigate this on a routine basis.”

The researchers remove by-caught fish from the nets and see how well they survive in water on board, as well as in the laboratory. “Injuries can have a long-term impact on fish,” says Molenaar. “We follow surviving plaice and sole for about two weeks, rays at least three to four. Survival depends on a range of factors, including the nets used, but also, for example, the practice on board, the weather and the water temperature.”

“We aim to gain an understanding on all those factors”, adds Schram, “so we know which adjustments are worth testing.” The results are relevant to the fishers’ business model, to sustainability, but also to policy.

If a species has a good chance of survival as bycatch, for instance, and can be successfully released, an exception can be made to the so-called landing obligation. This rule stipulates that fishers are obliged to land their bycatch (i.e. of fish species under quota – not crabs and starfish), to ensure that it ends up in the statistics and is taken into account in policy.

Bycatch also depends on the type of net. “The fish with the best chance of survival is the fish that you don’t catch,” states Molenaar. “It’s a matter of preventing unwanted species from entering the net.”

So-called pulse fishing was a useful innovation in this regard: it uses electrical pulses to chase flatfish out of the seabed, and eliminates the need to drag chains across the seabed. Pulse fishing reduces bycatch as well as damage to benthic life, but is no longer allowed, according to European rules.

“Other innovations can also prevent unwanted species from swimming into the net,” says Molenaar. The challenge is to look for species-specific solutions, the researcher explains, for instance in the way the nets are dragged across the seafloor. Similarly, you can provide escape routes for unwanted fish that end up in the net after all. Some species tend to swims upward when cornered, while others swim down. “You can tap into this by fitting the net with escape hatches that are either higher or lower up. Or you can create a sorting grid, which some species can pass and others cannot, depending on their shape, size and behaviour.”

Schram, Molenaar and their colleagues from Wageningen Marine Research maintain a close collaboration with the fishing industry. This way they are quickly alerted to questions and problems that arise in the sector. They receive tips and ideas from the field and can test their methods and innovations on board. This allows innovations to land in practice more quickly. “It’s a two-way process,” says Molenaar. “It is up to us to listen carefully, explore different options and show the sector what is possible.”

It is a satisfying collaboration, say both researchers: their research contributes directly to more sustainable fishing and better policy. Both depend on a sound knowledge base.
What’s more: the fishers they work with are all enthusiastic.

“But they may not be fully representative,” Molenaar nuances. “The professionals who work with us are the ones who really want to innovate. That is a very comfortable position.” 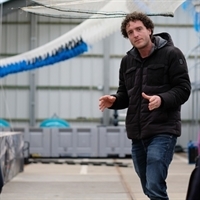