The international World Food Day (16 October), held annually at the initiative of the Food and Agriculture Organization (FAO) of the United Nations, draws attention to food security in the world. The question has always been whether there is enough food available to feed the world's growing population. Due to climate change, sustainable food production is also gaining a higher place on the agenda. This year, special attention is being devoted to the necessity of improving access to food. 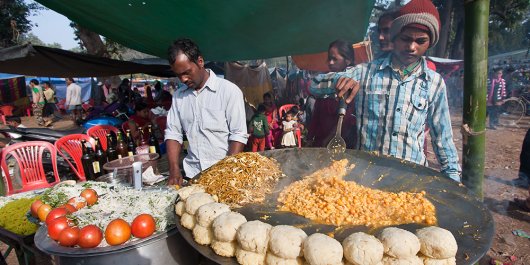 While the technical possibilities of producing sufficient food appear to be in place, it has turned out to be much more difficult to make this food available in the right place at the right time, and also making it accessible for poorer population groups. The fast progress of urbanisation adds an extra challenge. While more than half of the world's population currently lives in cities, the expectation is that two thirds will live and work in cities by 2050. The number of megacities (cities with more than 10 million inhabitants) has also increased over the last 25 years from 10 to 28, and there are expected to be 41 in 2030.

More people living in a city means a necessity to invest more in the road network in order to be able to transport food from the surrounding area into the cities quickly and in storage facilities with suitable capacities (particularly chilled storage for vegetables, dairy products and meat). Food is lost along the chain from farmer to sales market. This can amount to up to 50% of the amount produced. The reinforcement of agrologistics forms an important priority area in guaranteeing the quality of food and the improvement of the food situation.

The urban population is also quick to adopt a very different dietary pattern. The traditional diet in which cereals and tuberous plants play leading roles is rapidly making way for a diet containing much more sugar, fat, and animal proteins. Supermarket chains are growing at a tremendous rate in many developing countries: in Africa, a quarter of all food is bought in supermarkets, while in Eastern Asia half of all food purchased is bought in supermarkets. The consumption of processed and pre-packaged food is also rapidly increasing - particularly among people with low incomes and two jobs - and eating at fast food restaurants is becoming more and more popular.

The world food problem is therefore taking a very different form. Whereas in the past attention was devoted primarily to hunger and malnutrition, the problem in many countries is now shifting to poor nutrition and unhealthy lifestyles as the causes of overweight and obesity. More and more insight is being gained into the so-called 'double burden' of poorer people in particular who suffered from malnutrition in their youth and as a result became extra susceptible to becoming overweight in later life. Parallel to this, 'traditional' infectious diseases are being surpassed by cardiovascular diseases as the biggest risk to society. In rural areas, too, it is not just a matter of a shortage of food; one problem is also a lack of variety in food. We must devote much more attention to the quality rather than the quantity of food. This is where the problems of the future will lie.