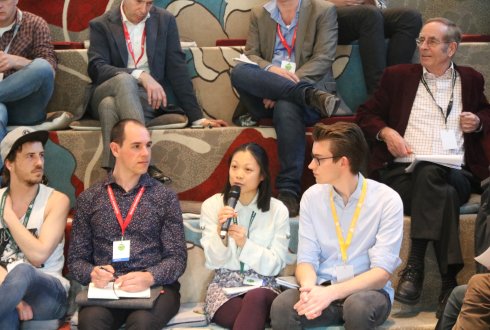 It's time to put a stop to polarisation in the agriculture debate.

Most people agree that we need a different, more sustainable food system. But the issue of how we get there is hotly contested, pitting ‘technologists’ against ‘ecologists’. Former adversaries Joris Lohman and Hidde Boersma suggest it’s time to bury the hatchet.

The world of agriculture and nutrition can feel like a war zone sometimes. On any given day there might be a devastating report released on calf mortality, triggering fierce rebuttals from within the sector. Then the next day, sparks will be flying in online arguments about glyphosate.

Everyone may now be on board with circular agriculture as a vision of the future, but how we get there is still unclear. There’s almost always a heated discussion going on somewhere.

In crude terms, there are two polarised camps in this debate: the ‘wizards’ and the ‘prophets’. These terms were coined by the journalist Charles C. Mann, author of a book on the opposing forces in the discussion about the future of our food system.

On one side we have the ‘wizards’, who believe that we can solve our problems through the clever application of technology. For them, the key to sustainability lies in our own hands. We’re bound to come up with another solution, yet again.

On the other side you find the ‘prophets’, who no longer believe that technology alone is the solution to climate change and other problems. They want to return to more natural systems. For them, less is more, and diversity is crucial.

It’s very important that we overcome this polarisation. We feel that the solutions for a truly sustainable food system will not be found solely in one camp or the other. And all the arguing is getting in the way of any genuine action.

We’re not going to win this ‘war’ by fighting over genetic modification, or about whether to eat organically, or to cut out meat.

Breaking through the polarisation

Last month we organised the symposium “When Wizards meet Prophets” as a way of breaking through the polarisation. The most important ‘wizards’ and ‘prophets’ in the Netherlands came together to thrash it out.

Researchers from Wageningen (including Louise O. Fresco, President of the Executive Board), the Louis Bolk Institute, NGOs such as Greenpeace and large agricultural companies such as Bayer and BASF tried to build a bridge between the two worlds and perhaps identify an overarching, common narrative.

With all the opposing viewpoints brought together in one room, a few key steps were taken to break through the eternal conflict. In a speech, reporter Mann advised participants to be conscious of the limitations of both sides of the story.

He compared the agriculture debate to a house, saying we’ve all been sitting in the living room for years, while there are other rooms full of interesting projects that barely get any attention. He called for a concerted push (including financial input) to think outside the box for new ideas that could secure the future of agriculture. For example, what might happen if we invested heavily in polycultures: agricultural systems featuring a mix of crop varieties?

Prophets and wizards would in any event benefit from learning from each others’ ideas. When ‘ideas have sex with each other’ they give birth to brilliant new plans, he said. For example: prophets would like us to derive our calories not just from annuals like wheat and rice, but also from perennials such as chestnut trees. What if we increase the yields of the latter through modern plant breeding technologies, drawing on the wizard’s methodology?

Participants at the symposium also agreed that it’s important to see your 'opponents’ not as monoliths, but as people, and to keep looking for the person behind the position. For Greenpeace’s supporters, Bayer might represent the ultimate villain, but Bayer really does have employees who want to see a more sustainable world. Conversely, agribusiness could move on from the notion that environmental movements simply stoke fear, and accept that they really do have ideas that are relevant to the future and which are worth listening to.

Momentum seems to be building for a ‘new narrative’ about the future of food and agriculture. It’s a narrative based on shared values, and which integrates facts, culture and emotion. Not a mishmash of the two opposing narratives, but a new perspective that could appeal to almost everyone. With the lessons of Mann, Fresco and Wageningen in mind, we want to start moving this new narrative forward here.

The new narrative is based on values such as biodiversity, nature, landscape and clean rural and urban environments, and is driven by ‘planetary boundaries’, or the limits of what our planet and ecosystem can bear.

The concept derives from the ‘prophets’ camp, but it’s now accepted by both sides. We all believe in supporting these values and are working on doing so together, with respect for each others' approaches.

The new narrative is based on an ecosystem paradigm, but eschews hollow romanticism. It’s therefore open to discussing modern plant breeding technologies such as CRISPR-Cas9, if they can contribute to more robust varieties requiring fewer pesticides.

The new narrative moves us on from the ‘one-size-fits-all’ approach. In the industrial paradigm, specialisation made sense, but we've now reached a level of expertise in which various systems – such as polycultures or dual-purpose farm animals – have become realistic and profitable.

It’s time to take these projects seriously and give them the highest platform, but we must do so as part of innovative projects where wizards and prophets work together. This is because the prophets’ ideas can sometimes benefit from the more practical and technical eye of a wizard. And it also wouldn’t hurt for the optimistic wizard to sometimes defer to the complexity and dynamism of nature and all its wonders.

The greatest rewards – recalling Mann’s words – are waiting for us on the roads less travelled, in experiments such as strip cultivation and agro-forestry. Imagine if large corporations such as Bayer allocated 10% of their research budget to initiatives such as these. In an instant, they would have established the world’s largest research project in that area.

These ideas are just the starting points of a new narrative. The job now is to build upon and expand this narrative, and to make it appealing. Not by placing it in opposition to another narrative, but by using arguments to build up this new one. In so doing, we can offer a positive pathway to farmers, businesses, policymakers, entrepreneurs and citizens, and finally accelerate our journey to a better food system.

This article is written as a wrap-up of the seminar When Wizards meet Prophets, organized by Wageningen Academy and FoodHub.
Twitter Whatsapp Linkedin Email
Menu