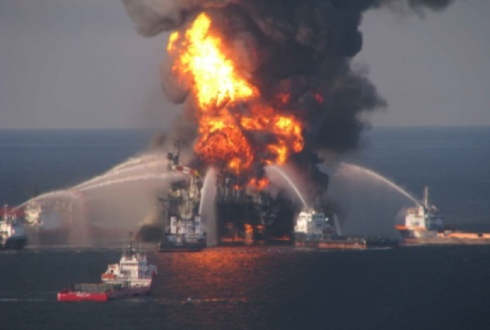 On 20 April 2010 the Deepwater Horizon (DwH) oil well exploded starting the largest oil spill in US history, releasing an estimated 700 million L of oil into the Gulf of Mexico (GoM). Large quantities of chemical dispersants (7 million L) were applied during the three months that the spill lasted to solubilize the oil and prevent oil from reaching the shores. In addition to application at the water surface, dispersants were also injected into the jet of oil escaping from the wellhead.

On 24 May 2010, BP committed $500 million over a 10-year period to create a broad, independent research program to be conducted at research institutions primarily in the US Gulf Coast States. The objectives of the Gulf of Mexico Research Initiative (GoMRI) are to investigate the impacts of the DwH oil spill and spill responses on the ecosystems of the Gulf of Mexico and the associated environmental stresses and public health implications. To ensure scientific integrity, GoMRI board followed National Science Board peer evaluation protocols to select research to be funded based on independent reviews performed by scientific peers.

The Center for Integrated Modeling and Analysis of Gulf Ecosystems (C-IMAGE) consortium was awarded two rounds of three-year funding from GoMRI. Led by Dr. Steven Murawski of the University of South Florida, the consortium consists of 19 U.S. and international partners to advance understanding of the processes, mechanisms, and environmental consequences of marine oil blowouts. Wageningen University & Research (WUR) contributes significant expertise and facilities to the C-IMAGE consortium with research focusing on:

The role of the phytoplankton community in MOSSFA; sending oil to the seafloor

During the spill a large increase of mucus-rich marine snow was observed at the surface, but later disappeared. Marine snow consists of aggregates of particles, including bacteria, suspended particles, and phytoplankton glued together by exo polymeric substances. Thanks to the GoMRI, extensive studies of the deep seabed revealed up to 10 cm thick oiled deposits at more than 1000 m deep. The formation and settlement of this oiled fluffy layer became soon known as MOSSFA: Marine Oil Snow Sedimentation and Flocculent Accumulation, a mechanism unknown before 2010.

To study whether the MOSSFA phenomenon may have occurred before, 60 historical oil spills were reviewed by Vonk et al, 2015. Literature was checked for information of oiled fluffy material, and conditions during the spill that are expected to favour MOSSFA: algal bloom, presence of inorganic particulate matter, application of dispersants and possibly the spill being a blow out and relatively low salinity due to river outflow. Some spills were identified as having conditions that would have favoured MOSSFA (especially the Ixtoc I blow out in 1979) while for other spills MOSSFA seems to be highly unlikely. Recent sediment core studies have shown that during the Ixtoc I, MOSSFA did indeed occur. Studying sediment cores at selected historical oil spills can support prediction where MOSSFA could be expected to occur in case of a new oil spill.

Within the C-IMAGE consortium, the Dutch group is studying the induction of extracellular polymeric substances (EPS) formation when dispersants are applied in the presence of high phytoplankton densities. Interestingly, the EPS is not formed when the algae are treated with antibiotics, indicating that associated bacteria produce the EPS. The composition of the EPS is phytoplankton species dependent and the EPS formation is strongly reduced in the dark, indicating that the carbon source for the bacteria is provided by the algae. More information about formation and composition of this glue-like important constituent of marine snow can be found in the publication by

Impact of MOSSFA on oil biodegradation

To study the fate and effects of oil on seafloor sediments, WUR compared impacts of oiled marine snow to oiled clays in aquarium experiments. Without organisms added, as in no bioturbation or mixing, degradation of oil was reduced by 31 % in the presence of marine snow (Rahsepar et al. under review). This coincides with a reduced oxygenated top layer, limiting the oxygen availability for the biodegrading organisms. By adding bioturbating organisms, the biodegradation of oil in the sediments increased (Van Eenennaam et al, under review).

Aquarium experiment testing the effects of marine snow on the biodegradation rate and toxic effects of benthic oil. Small photos: snail at glass wall (A), Corophium and its bioturbation tracks (B).

Impact of MOSSFA on benthic community

The effects of oiled marine snow depended on the habitat use of the benthic animals. The bivalves and foraminfera that live in the sediment were greatly affected by the presence of marine oiled snow, likely because they were suffocated upon the oxygen consuming biodegradation of the organic matter. The amphipod Corophium is a more mobile benthic organism that can dig in the sediment, but also can swim in the water. Corophium is very sensitive to the oil, and to a lesser extent to the marine snow. When the same amount of marine snow is added in four smaller portions, they are able to cope with it and the snails are able to fully escape from the oil by staying on the aquarium glass. As a result they are not affected by the oil unless they choose to eat the oiled marine snow (Van Eenennaam et al under review). Given the potential prolonged and added toxicity of oiled marine snow compared to oil settled with clay, conditional algal blooms and large river outflow containing mineral particles are important factors for spill responders to consider in their efforts to limit damage.

The aquarium experiments were performed with slightly weathered oil. However, fresh oil escaping from a wellhead still contains volatile and more hydrophilic components that gradually dissolve in the water on the way to the surface,  where compounds that are more volatile evaporate within hours. When dispersants are applied at the wellhead, where oil still contains volatile compounds, the more toxic compounds are dispersed as well. The acute toxicity released from fresh oil is shown detrimental for the oil biodegradation. Rahsepar et al, 2016 showed that dispersant addition enhanced dissolution of aromatic compounds into the water, seriously inhibiting the alkane degrading bacteria.

Currently, the aquarium experiments with oiled marine snow are in progress with the focus on recovery mechanisms of environments to marine snow.

The added value of dispersants in oil dispersion quantified

Application of chemical dispersants on surface oil is an amplification of the naturally occurring dispersion process. As this process moves oil to the water column it is a trade-off between surface effects (impact of floating oil) and sub-surface effects (impact of suspended oil and potential adverse effects on the benthic system). Making an informed decision regarding such response, requires insight in the induced changes in fate of oil and potential effects. The PhD thesis work of Zeinstra (2016) provides a better understanding on the NET effectiveness of dispersant application on surface oil fate, based on a better mechanistic understanding of the dispersion process.

Zeinstra et al. 2015 defines a conceptual dispersion model  and uses it as a basis to review the literature of dispersion testing for key variables in oil spill dispersion that can be applied to both natural as well as chemical dispersion.

For most of the steps in the dispersion process, sufficient information is available or  deduced from existing test data. This was not the case for the entrainment of oil, which has limited studies investigating the complex process. Using plunging-jet experiments, Zeinstra et al., 2016a shows that the oil layer thickness plays an important role in the dispersion process in addition to oil properties. The entrained volume was proportional to oil layer thickness. Although the mean droplet size slightly increased with layer thickness, the overall volume in small droplets also increased with layer thickness.

To be able to model the influence of oil type and presence of dispersants on the entrainment process, plunging jet tests were performed with a range of 7 different oil qualities. Oil entrainment was largely unaffected by oil properties, such as adding a 1:200 dose of dispersants. However, entrainment of oil was very limited above a plunging-energy dependent viscosity threshold. The research revealed that mass median droplet size can be estimated using several factors: layer thickness, plunge height, oil viscosity and interfacial tension. For example, dispersants do not affect the dispersion of very viscous oils, as they would with less viscous oils. (Zeinstra et al., 2016b). It is imperative that all different oil types be described in only a few basic characteristics for modelling interaction with dispersants and droplet size formation in dispersion processes.

Oil slicks at sea are observed to attain elongated, comet-like shape. This means that the dispersion process influences the slick size and thereby effects to organisms and ecosystems. Modelling the entrainment and resurfacing of a slick shows the changes of mass distribution over the life of the slick. Simulation outcomes indicate two separate regimes: The surface oil slick changes from a large comet shaped slick with sub-optimal dispersion, to a small surface slick with a large suspended oil mass for optimal dispersion. Zeinstra et al (under review) shows how these outcomes largely depend on wind speed and to a lesser extent oil properties. Dispersants mainly have added benefit in situations with sub-optimal dispersion (comet-shaped slicks), with the exception of very viscous oils.

This research is funded by grants from The Gulf of Mexico Research Initiative/C-IMAGE I & II, and in part by the Wageningen University & Research, IPOP TripleP@Sea innovation program (KB-14-007).