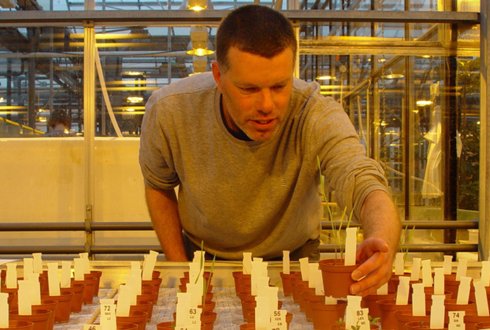 Researcher Wieger Wamelink gets many questions about his research on growing vegetables on Mars and moon soil. Here are the answers.

Why do you want to grow plants on Mars?

When people travel to Mars in future they will have to live there for longer periods of time. They could of course bring along all the food they need, but it would be much tastier and more convenient to be able to grow your own food there. And if the food tastes good the astronauts will eat more of it, which is good for their health.

Where does the Mars and moon soil in your research come from?

The moon and Mars soil don’t really come from the moon or from Mars. Moon soil is hard to come by and no Mars soil has yet been brought back to Earth. That’s why NASA looked for soil that closely resembles Mars and moon soil. The Mars soil we use in our experiments comes from a volcano on Hawaii and the moon soil from a desert near Flagstaff in Arizona. They cleaned it and used a big roller to roll over the moon soil to make it extra dusty, as it is on the moon.

Is it safe to eat food that was grown on Mars and moon soil?

This is an important question because we know that there are heavy metals in the Mars and moon soil simulants we use, just as there are heavy metals in real Mars and moon soil. We tested this in two ways. First we checked whether heavy metals such as lead, mercury and cadmium from the soil ended up in the water we give the plants. This was not the case: we didn’t find any metals, except a little bit of aluminium in the water of the moon soil. We also tested whether there were any heavy metals in our harvest: the tomatoes, peas, radishes, and rye. They turned out to be safe to eat. We did have to carefully wash anything that grows underground, such as radishes, but also carrots and potatoes, because they were covered in soil. And eating too much soil could make you ill in the long run.

What are the biggest challenges of growing plants on these soils?

Apart from the heavy metals, one of the problems is that these soils contain very little of a specific fertiliser: nitrogen in a form that plants can absorb (nitrate). However there is a special group of plants, known as legumes, which include clovers, but also lupins and peas, that work together with bacteria to absorb nitrogen from the air. By growing these plants and digging in the non-edible parts (stems and leaves) we can fertilise the soil.

Isn’t it very cold on Mars and does the planet lack air? How can people live there at all?

There is almost no air on Mars, and the temperature varies from -60 to -100 degrees Celsius, sometimes it is above zero. This is why people would always have to wear a space suit when going out. But you could of course live indoors. In fact you would have to, because Mars has hardly an atmosphere and no electromagnetic field to protect people from cosmic radiation. To protect themselves from this radiation, people might have to live under one metre of Mars sand. And this applies not only to people, but also to plants; plants cannot live without air, or in such low temperatures. Plants are less sensitive to radiation than people, but they can still suffer from it. This is why vegetables would also have to be grown indoors, under LED lamps.

Opinions differ on whether Mars and moon vegetables taste different than their equivalents from Earth. We had lots of people taste the tomatoes, beans and rocket, and most people did experience a difference in taste. Some people found the Mars vegetables tastier, while others preferred the Earth vegetables. We still have to find out whether there is a real difference, for instance by checking how many sugars there are in the various vegetables.

Can you cook on Mars? Or do you have to eat all the vegetables raw?

You can cook on Mars, but only indoors. Because that’s where the air and air pressure are the same as on Earth. Outside the water would immediately evaporate and partially freeze. The vegetables would freeze as well, but you could still eat them in principle, since this is a bit similar to molecular cuisine.

Can you also keep animals on Mars? Chickens, cows, pigs? As food or to make manure for the plants?

You could keep animals on Mars, but that would require a tremendous amount of food and space. Animals are very inefficient in processing what they eat into meat and other products. The manure would be welcome for fertilising the soil. But for now, there are no plans to bring animals to Mars. We might make an exception for chickens. A chicken will eat any vegetable and produces manure that is easy to use. And a chicken is relatively efficient in processing what it eats into meat and eggs. In addition, a chicken could be kept as a pet, to offer comfort in difficult times.

What is the next step in your research?

One of the things we would like to investigate is whether worms can live in Mars soil. Worms eat plant residues and partially secrete them back. In this way they spread plant residues throughout the soil. This is better for the soil because it helps it retain water better. Worms also aerate the soil so that it’s easier for oxygen to reach the roots, which need it to grow. We would also like to find out whether bacteria can live in this soil, because bacteria can transform dead plant residue into food for plants, and they help convert nitrogen from the air into fertiliser.

Right now we have a number of secondary school students (VWO and HAVO) doing experiments for us as part of their profile papers: they are investigating whether adding chicken manure to Mars soil leads to a higher yield, whether you can grow peanuts on Mars soil, and whether LED lamps combined with Mars soil yield enough vegetables.

When do you think people will be able to travel to Mars?

There are plans to send people to Mars within ten years, but I think that’s a bit too optimistic. I expect that people will first set foot on Mars only after 2030.

No, I think it’s much too far away; you have to travel for at least six months to get there. I would like to go to the moon, though, that’s only a two-day trip. And anyway, by the time people will really be able to fly to Mars it will probably be 2030 and I will be too old to join one of the early missions.