Wageningen researchers Rutgerd Boelens and Joris Sprakel are each to receive a substantial grant from the European Research Council for their groundbreaking research proposals. Each of the researchers is awarded a sum of just under two million euros from the ERC Consolidator grant to conduct research on dealing with river water and a striking chemical bond.

Rutgerd Boelens, of the Water Resources Management group, focuses on river and water management in Europe and Latin America. In his research proposal, entitled Riverhood, he focuses on hitherto barely noticed bottom-up initiatives. In these new initiatives, the participants view the rivers not just as a reservoir of flowing water, but as a living entity in which nature and humans are ecologically and socioeconomically deeply intertwined.

Joris Sprakel’s project focuses on strange and strong chemical bonds: catch bonds. The professor at the Physical Chemistry & Soft Matter group studies the secrets of an unusually strong chemical bond discovered at the start of this century in nature. This bond increases in strength under pressure. Understanding this amazing chemical characteristic and eventually copying it under laboratory conditions, is the challenge he faces. 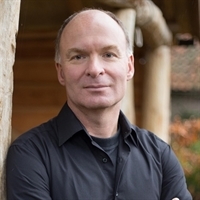 Photo: This finger trap becomes firmer with pressure, just like the catch bonds.

The most important tool of any chemist is the chemical bond. About 15 years ago a chemical bond was discovered in nature that does the exact opposite of the bonds that chemists make in the lab. These catch bonds becomes stronger the more they are stressed. The research group of Joris Sprakel, part of Physical Chemistry & Soft Matter, has secured EU funding of little under 2 million euros for research into this bond. This is through the most recent Consolidator Grant competition of the European Research Council (ERC).

Sprakel is joyed with the funding: “I want to understand how it’s possible that these natural bonds work completely differently than anything we can make ourselves. These catch bonds may seem exceptional, but are in fact used a lot by nature. I want to take this research a step further and try to actually imitate this in the lab.”

Screams to be understood

Sprakel thinks we still know surprisingly little about how these bonds work and why they are so widely used in nature. “I find that remarkable for something so fundamental to our entire field. The discovery of a bond that turns our existing knowledge upside down is crying out to be studied and understood.”

It may also have practical implications, he indicates. “A major challenge in chemistry is to mimic certain mechanical properties of biological materials so well that cells can be grown in the lab into functional tissues or organs, without these cells noticing that they are in a petri dish instead of in a living being. Recent insights show that these unique bonds, the so-called catch bonds, can play an important role in this process of tissue formation in nature.”

He continues: “If we can’t understand or imitate these catch bonds, then we can’t use their function to improve tissue culture. My hope is that in this project we learn what catch bonds do in this process and that we can copy them. For example, at the end of the project, we can use our synthetic catch bonds in collaboration with tissue culture experts, to see whether this development can help that field move forward.”

He nuances that this is really an aim far on the horizon. "I specifically want to advance our fundamental knowledge on the stability of chemical bonds."

The European Research Council, founded by the European Union in 2007, is the first European funding organization for excellent groundbreaking research. Each year, it selects and funds the very best, creative researchers of every nationality and age to carry out projects in Europe. It offers four core grant schemes: Start-up, Consolidator, Advanced and Synergy grants. With its complementary Proof of Concept grant scheme, the ERC helps beneficiaries bridge the gap between the beneficiaries' groundbreaking research and the early stages of its commercialization.

Rivers are under pressure. Rutgerd Boelens will apply his ERC consolidator grant towards studying the many ways in which water rights are distributed, in particular in Latin America, how culture and rivers are intertwined and what reasoning various parties use to defend or claim the right to water.

In this research, he focuses on a new and very diverse movement that campaigns for the ‘living river’ and ‘social-ecological justice’. Because, despite the fundamental value of rivers for social and natural well-being, pollution and mega-dams as well as other man-made controlling measures designed to serve human convenience, put rivers across the globe under pressure.

Coproduction between human and nature

The new movement that the personal professor of the Water Resources Management group focuses on is described as new water justice movements (NWJMs). These groups have hitherto remained unnoticed by policymakers, governments and researchers. An omission, according to prof. Boelens: ‘Science and governance lack the views and understanding to deal with rivers as a co-production between humans and nature. While these groups have the power to manage rivers in compliance with the rivers’ natural value’.

Innovative, sustainable and just water management is thwarted by the fact that river water is managed by powerful “hydrocracies” in which policy is designed by bureaucratic organisations, expert institutes and rich market actors. ‘The Golden triangle (government, market and knowledge institutes), that was hailed until recently is mostly blind to the creativity of movements rooted in society’, prof. Boelens adds.

The NWJMs use alternative principles and practices to challenge the powers that be. In doing so, they aim to foster ‘social and ecological justice’. They translate global concepts into local concepts and vice versa. They organise new, exciting strategies, ranging from river-health clinics, removing dams, socio-ecological flow projects to mobilising a new water culture and nature rights. European NWJMs learn with their peers in Ecuador and Colombia: the pioneering countries where rivers are not only legal-political actors but also ‘loaded’ concepts. ‘NWJMs have a huge potential to contribute to a radically new, just and nature-based water management.’ Rutgerd Boelens concludes.

In his Riverhood project, Boelens and WUR colleagues Jeroen Vos and Lena Hommes, develop a new European-Latin American trans-disciplinary network, a new analytic framework to study NWJMs. Four PhD candidates will closely study eight cases in Ecuador, Colombia, Spain and the Netherlands, and link these through academic comparisons and societal interaction. Thus, they hope to generate more insight into the water worlds and foster knowledge, co-creation and democratisation.