The Feeding City — a collaborative research programme between the AMS Institute, municipality of Almere, province of Flevoland and Aeres University of Applied Sciences — is embedded on the Flevo Campus, thus facilitating opportunities for research, education and entrepreneurship relating to the ‘Food and the City’ theme. The programme objective is to innovate the urban food system by working closely with the business community, institutions and residents from the city and the surrounding region.

Research themes include: the linkage between food, green spaces and health in the city, food in the city as a driver of the circular economy, new forms of food production, urban logistics systems and food and DIY urban planning. Preparations are already under way for three high-profile projects: the Healing Garden, the Street of the Future and City Farming. In the coming period, this programme will be further expanded. There are also plans to set up a summer school and to organise a Floriade Dialogue, which will involve sessions that bring together scientific, business and governmental experts to discuss pertinent topics around ‘Food in the City’.

‘Food in the City’ is an emerging theme, which is only natural given the ubiquitous nature of food that touches on virtually all aspects of urban society. This remains true whether we want to promote citizens’ health, to encourage social cohesion, to reduce waste, to close raw materials cycles, to streamline traffic flows or to stimulate employment. That is why citizens and entrepreneurs are launching multiple initiatives in this specific area. The Urban Food Policy Pact, signed last year in Milan by 129 mayors from all over the world, demonstrates that city administrators are fully aware of the power of innovation in this area.

Almere and Flevoland are ideally suited to researching food systems within a living lab — the common form of research at the AMS Institute — not only because of their abundant greenery or the leading position of the agricultural sector, but also because of their ambition to focus on food and all that it entails in the ongoing development of the city. With its theme ’Feeding the City’, World Expo Floriade 2022 will provide excellent opportunities for both testing innovation prototypes and for showcasing them to a wide international audience. 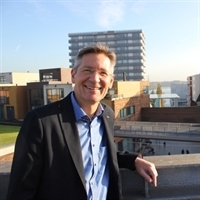