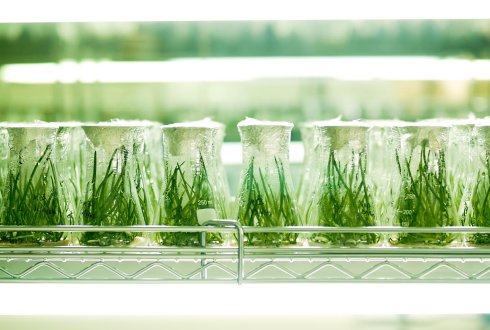 Experiments have proven that plants can serve as a source of clean and renewable energy.

As part of the European project PlantPower, researchers are studying whether this technology is suitable for large-scale applications.They are also examining the technical feasibility and the economic profitability.

Scientists all over the world are looking for alternatives to fossil fuels. Plant materials are already used as an energy source through bio-fermentation. Now it appears that living plants can also contribute to energy production. In a plant microbial fuel cell, living plants work together with micro-organisms to create electricity. This results in clean and renewable energy, while the plant remains alive. The first practical tests have been very promising. In projects supported by the EU and Agentschap NL (an agency of the Dutch Ministry of Economic Affairs), European and Dutch institutes, universities, and businesses are cooperating to gain more knowledge about this technology and its applications.

The plant microbial fuel cell , developed by Bert Hamelers of the Sub-department of Environmental Technology at Wageningen University, was first described in 2008. The cell is based on the following principle: With the aid of sunlight, plants convert CO2 into organic compounds (photosynthesis). The plant uses some of the compounds which arise in this way for its own growth, while the remainder is eliminated through the roots. Micro-organisms which are naturally found in the ground around the roots of plants break down these organic compounds. This process causes electrons to be released. It is possible to gather these electrons with an electrode and use them to generate electricity. This system is capable of supplying green energy 24 hours a day, seven days a week. The direct current which is produced in this manner has a low voltage (1V) and as such is not dangerous for animals or plants.

Some of the topics which the PlantPower researchers are examining include the processes in the plant, the micro-organisms in the rhizosphere (root zone), the existing energy losses, and the most suitable materials for a plant microbial fuel cell. Scientists from Wageningen have a prominent role at PlantPower. Bert Hamelers, Assistant Professor at the Sub-department of Environmental Technology, acts as project coordinator. Staff members of his sub-department focus on combining the various constituent processes into a viable system in the plant microbial fuel cell. Researchers from Wageningen UR Greenhouse Horticulture (website in Dutch) are primarily studying the substances eliminated by the plants and the applicability of the cell for food crops such as tomato plants.

PlantPower has already achieved tangible results. By optimising the process, the amount of energy which can be produced has more than doubled: whereas previously the maximum was 67 mW/m2, now 222 mW/m2 can be produced. Researchers have also established that the production of electricity does not interfere with the growth of the plant. This means that the technology can also be used with food crops, for instance in greenhouses.
As a spin-off of this project, researcher David Strik of the Sub-department of Environmental Technology has started the company Plant-e together with his colleague Marjolein Helder. The company’s goal is to transform the patented technology into tangible products. The researchers are actively developing design products which run on plant energy. Some of these products will be brought on the market as early as the end of 2011.

Links (some links in Dutch):