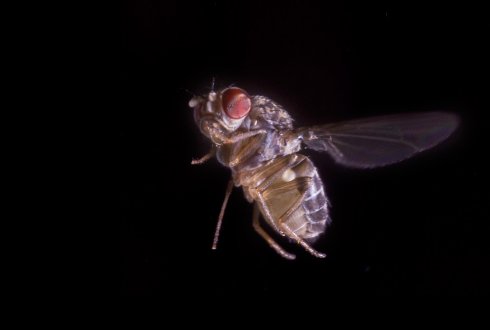 Flies rely on the laws of physics to carry out complicated aerial manoeuvres. “To avoid danger, they make clever use of aerodynamic forces so they never become unbalanced and can rapidly escape,” says Florian Muijres, researcher at the Experimental Zoology Group of Wageningen University & Research. This has been presented in Science (13-09-2018).

Muijres made this discovery in association with researchers from Delft University of Technology (TU Delft) whilst copying the manoeuvres of fruit flies using an insect-inspired flying robot, the DelFly Nimble. This newly developed robot by the TU Delft has a wingspan of 33 cm and flapping wings. It can hover, fly in all directions and, like fruit flies, perform agile aerial tricks.

“We were able to follow every beat of the robot’s wings from the inside or, if you will, get a look at the control room,” says Matej Karasek, researcher from TU Delft. It turns out that fruit flies do not actively control every aspect of an evasive manoeuvre. “In order to simplify and speed up its manoeuvres, a fly allows itself to be directed by external conditions. This is similar to how bike handlebars remain pointed in the right direction when you take your hands off them,” adds Muijres.

Hypotheses on fruit flies tested with a robot

A number of hypotheses from earlier fruit fly research by Muijres were tested using the newly developed robot. “Movements that we could not explain using high-speed imaging, for example, now have an explanation,” he says. The robot is therefore very useful in investigating how animals fly. “And with the mechanisms that we are discovering we can, in turn, make better flying robots,” adds Guido de Croon, researcher from TU Delft.

Collaboration between Wageningen and Delft

“The Experimental Zoology Group of Wageningen University & Research and TU Delft have previously worked together on the first DelFly,” explains Muijres.
The DelFly Nimble will be further developed within the TTW project “As nimble as a bee”, which is a collaboration between TU Delft and Wageningen University, funded by the Dutch science foundation NWO. The current collaboration focuses simultaneously on studying flying insects and making flying robots more manoeuvrable. “Research areas that can reinforce each other, as shown by the DelFly Nimble.”

Read the article in Science

More about the DelFly Nimble