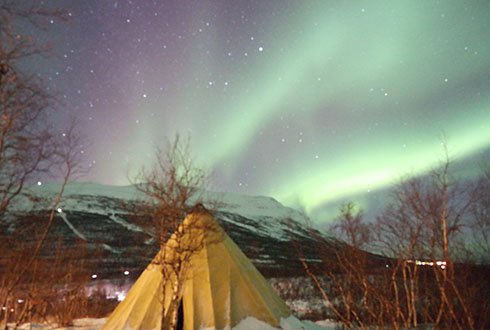 The day after the dog sledding we left Kiruna and drove further north. First we made a stop at a traditional Sami family who are herding reindeers. When we arrived we went into a tippi and a Sami women told us some traditions about their culture. We also got some kind of broth, which was made of the bones and meat of the reindeer they herd. They usually drink this to get some energy really quickly and to warm up when they are herding the reindeers.

Now it was time to go outside and see some reindeers. We all got some food to give to the reindeers and an older Sami man told us more about the reindeers, which was really interesting. After this visit we moved further to our next stop, where we would stay for the next two days, national park Abisko. This night we came together in a Sami tippi and chase the northern lights. This was the first night that I finally saw the northern lights, it was amazing to see! Also the sky itself was really beautiful, so many stars, incredible!! The only thing that made it really hard to watch for a while was the cold. Outside it was -10 with a real feel of -14, but when you got too cold we just went into the tippi for some hot glöck and roasted marshmallows!