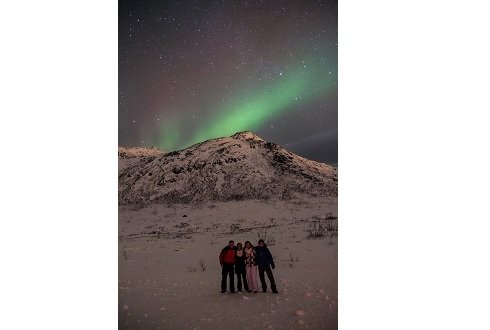 It's now 10 days ago that I arrived by airplane in Tromsø. Jonathan Filius has studied in Norway for two years, so he nows already a bunch of people here, so we got picked up by a car at the airport. After a total revalidation of the flight we went to Ørndalen, which is the area with studenthouses where Tim Lardinois and I live. I've got a very cosy house with a lot of social people. Tim's roommates aren't that nice, so now he became my houseparasite.

The next days we went orientating on the shops and other handy places. After a few days the introductiondays started, which consist mostly of handy tips for bustickets, where the lecture rooms are and where you have to be if you have any problems. During the activities and lunchtime we got to know other international students and most of them came from Russia or Germany. Now I have a nice group of friends from Czech Republic, because my roommate is from Czech Republic. With them I went on Aurora hunting to see the northern lights, because my roommate has a car. You have to rive very far from the city to have no citylights, to see the northern lights the best. We already saw the northern lights the first time we went out (see picture by Marek Soltys).

In the mean time my lectures has started. I noticed that the lectures here are way different then the Dutch ones, because the teachers introduce themselves very personal with a powerpoint in which they tell us where they have been and what they have done so far. The lectures are also very interactive, for example in the first lecture we had to make a queue in which we were ordered in the distance you live to the sea. There are many international students at my lectures: From Spain till America. The classes are also very small: Only 17 students. In the first lectures they gave us very general facts about the ocean and the arctic area, but I suppose we'll dive soon deeper in the subjects.

Last friday I had my first party here in Tromsø. That was in a laundry house, where someone has put on some lights and put his Ipod in the music system and the party is ready to start. The different thing about these partys are that everybody has to bring their own drinks, which is very strange for me. I don't think this is really social, because you drink together and you share it with together, right?

I already have seen a lot from Tromsø, because of the car of my roommate. I've been in the polar museum and on a mountain across Tromsø with a cable car to have a nice view all over the island (see second picture). I've also been in the sauna, which was not that spectacular as I expected, because the snow was só cold that it was actually ice and it isn't that comfortable to lay on. Maybe I make next time a soft small hill with snow to dive in after sauna. I've also heard from a place where you can dive into the sea after the sauna, maybe that's a better idea.

Tomorrow is the first day that the sun will appear in Tromsø, so there is a Welcome Back Sun Celebration, with hot drinks and a fire in the afternoon.