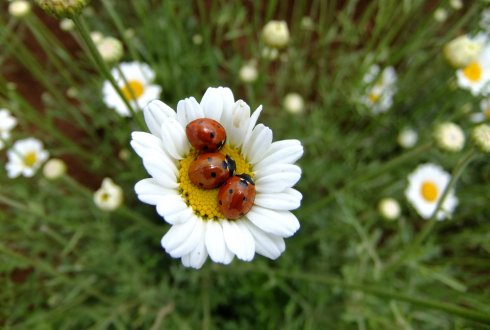 A daisy species has developed a natural mimicry defence against aphids by producing an alarm pheromone that triggers a flight response in the insects. The very same pheromone attracts ladybirds, looking for aphid prey s that aren't actually there. For the daisies, it's a doubly effective form of protection.

After a decade of research, ecological evidence has finally been delivered of this natural defence mechanism. It was a long standing hypothesis since the early 1980s that this pheromone in leaves of some other plant species would act in nature to dispel aphids and attract herbivores, but now there's definitive field evidence for this role in pyrethrum flowers (Tanacetum cinerariifolium, related to the oxeye daisy).

In 2009, Maarten Jongsma, a researcher at Wageningen University & Research, noticed a high density of ladybirds in fields of pyrethrum daisies in China, and wondered what they were doing there. There was nothing for the insects to eat, and he suspected they were drawn to a scent released by the flowers. This marked the start of 10 years of research, in collaboration with professor Caiyun Wang of Huazhong Agricultural University in Wuhan, China, which is now published in the journal New Phytologist.

Both field and laboratory research by the Chinese PhD student Jinjin Li confirmed that ladybirds are attracted to the scent of young flowers in particular, and that the same scent strongly repels aphids. The dominant alarm pheromone in the flower volatile blend was shown to trigger this response. The gene for the pheromone was isolated and used to demonstrate that the plants produce and store the compound just below the flower, exactly where aphids would normally be found in the related common daisy.

Many aphid species produce this same alarm pheromone upon attack. Ladybirds are very familiar with it because every time they gobble up an aphid, the aphid releases two droplets containing several nanograms of the compound from two tiny organs, cornicles, on its back (see photo). The scent is thus associated with a delicious meal for the ladybird. Aphids release the scent to alert their twins (they clone themselves) to the threat. Any aphids that do land on the pyrethrum daisy, and start probing for the sweet sap stream of the plant, will initially take sips from cells filled with the alarm pheromone. A bit later this ingested material is secreted via their honeydew, and the powerful smell of it intercepted by their scent-detecting antennae. This self-inflicted burst of scent will then cause false alarm and trigger their flight response. All in all, it's a hugely sophisticated defense system of chemical mimicry resulting from thousands of years of evolution.

Follow-up research will now selectively switch off the gene responsible for the alarm pheromone to see if then the plants indeed suffer more from aphid infestations, and ladybirds stop visiting. This will clarify the precise ecological impact of this natural characteristic in the field.