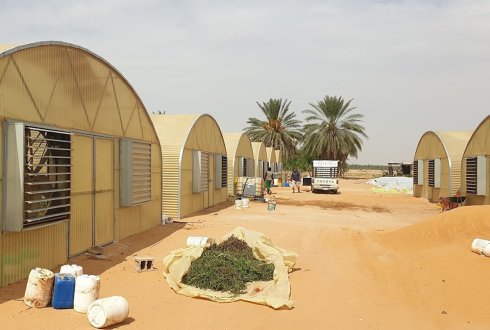 Growing conditions in Saudi Arabia are very difficult. The climate is dry and warm. Nevertheless, the Greenhouse Horticulture Business Unit of Wageningen University & Research (WUR) has succeeded in producing 80 kilograms of tomatoes per square meter on an annual basis. And that does not even require a high-tech greenhouse: targeted watering appears to make a huge difference.

WUR has been active in the Arab region for around 13 years, including in Abu Dhabi (United Arab Emirates) and Riyadh (Saudi Arabia). A research center has been realized in Riyadh. There WUR investigates whether it is possible to grow vegetables with less water and pesticides. Three types of greenhouses have been built for this purpose: low-tech (plastic tunnels), mid-tech (greenhouses of glass) and high-tech (of glass and with air-conditioning).

Knowledge exchange is essential for the step forward in Saudi Arabia. That is why WUR has also started a project to inform more growers and their employees about the new cultivation methods. To this end, demonstration companies are set up, where improved cultivation techniques are compared with existing methods, not only practically but also economically.