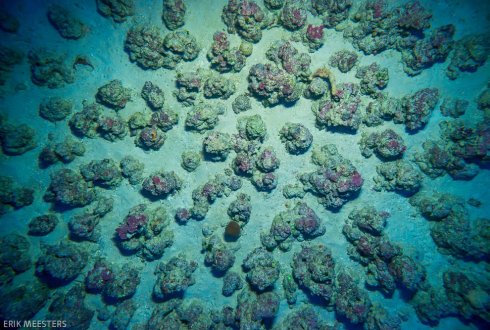 From 5 to 20 December, the Royal Netherlands Institute for Sea Research (NIOZ) and Wageningen Marine Research are organising an expedition to the Saba Bank, close to the Dutch island of Saba in the Caribbean region. Experts on board the research vessel Pelagia hope to acquire more knowledge about the sinkholes and the hundreds of recently discovered strange calcareous algae turrets.

The researchers will extensively explore all 21 sinkholes on the Saba Bank. The aim is to find out more about the nature of the calcareous algae turrets and the environmental factors that influence their growth. How does the exchange of water between the sinkholes and the flowing water above work, and which biological communities and nutrients such as bacteria are present? This research will provide insights into why these turrets occur at some sinkholes but not others.

The research vessel will drop a wide range of measurement equipment and cameras to a depth of many tens of metres. These will be used to collect various data about the water column, and take samples of water and seafloor life, including an effort to bring several turrets to the surface. The researchers will also place anchors with measurement equipment in the sinkholes so that about seven days of monitoring will be possible during the expedition.

In 2018, during the NICO research expedition at the Luymes Bank and part of the Saba Bank, the current expedition leaders Fleur van Duyl (NIOZ) and Erik Meesters (Wageningen Marine Research) discovered more than 20 enormous holes ranging from 10 to 375 metres in depth and with diameters varying between 70 to 1100 metres. The floor of the Saba Bank consists of a limestone deposition one to two kilometres thick. When the bank lay above water during the ice ages and the sea level was 120 m lower than it is now, flowing freshwater dissolved the limestone and created large holes. This first led to the formation of caves, which subsequently collapsed. These sinkholes that developed on land were subsequently submerged after the last ice age (20,000 years ago), when the sea level rose again.

A well-known marine sinkhole is the “Great Blue Hole” off the coast of Belize in the Caribbean Sea. This hole is visible from space because it lies close to the surface and it looks like a sort of dark eye in a light blue sea. China claims the deepest described sinkhole, the “Dragon Hole” in the South China Sea, with a depth of 308 metres. However, the floor of the deepest sinkhole on the Saba Bank is certainly 375 metres deep and is therefore deeper and larger than the “Dragon Hole”. So far, no other area has been found with so many sinkholes - more than 20 - at such a short distance from each other.

Knowledge about the Saba Bank still far from complete

From a scientific perspective, little is known about the ecological functioning of the Saba Bank. And there are even many blanks on the map. “During the NICO expedition last year, we discovered a unique and spectacular biological community in one of the sinkholes on the Saba Bank at a depth of about 110 metres”, says expedition leader Fleur van Duyl from NIOZ. “On the seafloor we found hundreds of calciferous algae turrets with diameters of 40 to 60 cm. These pink-purple turrets consist of layers of crustose calcareous algae and reminded us of the Chinese terracotta army.” According to Erik Meesters, expedition leader of Wageningen Marine Research, these calcareous algae probably grow very slowly at that depth because there is very little light. “They might be able to tell us more about the history of the Saba Bank and the conditions under which the sinkholes were formed.” What makes this expedition so special for Meesters is that they do not know what they will find; “Most of the sinkholes on the Saba Bank have not yet been visited by anybody and that makes it particularly exciting.”

The biggest protected nature area in the Netherlands

The Saba Bank, several kilometres to the south of the island of Saba, covers more than 2400 km2 and is therefore the largest protected nature area in the Netherlands. The bank, which in terms of size is comparable to the province of Utrecht, lies completely underwater and is important from both a biological and economic perspective. The submarine mountain rises from the seafloor at a depth of 1000 metres to on average 30 to 40 metres below the sea surface. Large parts of the edges of the bank consist of extensive, healthy coral reefs. This region in the Caribbean Netherlands is also part of the shark and sea mammal nature reserve Yarari designated by the Dutch state. The importance of the biodiversity of the Caribbean Netherlands is internationally recognised by a designation of the Saba Bank as an Ecologically or Biologically Significant Marine Area (EBSA) under the Biodiversity Treaty.

The living calcareous algae turrets on the floor of one of the sink holes. Source: Erik Meesters